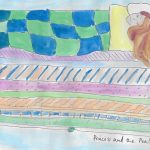 Knightley comments that characters such as Cinderella (waiting around for a rich prince to rescue her), The Little Mermaid (gives up her voice for man), the prince in Snow White kissing her while asleep (without consent) provide poor role models for today’s girls. I personally would add The Princess and The Pea which grates a little, suggesting as it does, that women should be extremely delicate. Being ‘hardy’ is a quality I admire in others and attempt to develop in myself and my children.

Add to this that nowadays we tend to shy away from the grimmer fairytales, worried that we will damage our children’s psychological health. Ironically, these tales were meant to disturb children, to give them a ‘safe’ space to confront darkness in all its forms, a sort of psychological training ground. Children’s brains will imagine monsters, orally depicted, in a way that they can cope with. In contrast to this and owing to the way children’s brains work, TV images of darker figures cannot be filtered or sanitised and are likely to cause distress.

So, what is the answer? Should we vet each story ensuring it is utterly political correct, safe, wholesome with a strong moral? I personally believe that a rich variety of stories, discussed with children is the answer. These can include stories we don’t actually ‘approve’ of but the discussion itself will have some merit. Storyteller Steve Killick talks about ‘the Tale, the Telling and the Talk’ f stories. A well-chosen tale, delivered well and discussed afterwards can provide more insight than scores of politically correct ‘safe’ stories. For older children stories can be put into cultural context, for example, discussing what the role of woman might have been when marriage was seen as a way of being rescued.

Bruno Bettelheim, in his The Uses of Enchantment: The Meaning and Importance of Fairytales, suggests that folktales are ‘recipes for examining the human condition’. Through stories, children find a sense of belonging, explore morals, visualise, wonder and connect with their environment, finding a sense of ‘place’ and confronting new or difficult ideas. Stories, he says, are like interlocking maps on different scales, which help children to make sense of the world.

When I first started storytelling I tended to stick to ‘safe’ stories. Later included stories that I did not necessarily agree with but would lead to interesting discussion with the children. So, a story about a frog who stole a squirrel’s nuts and lost his teeth as a consequence became an opportunity to discuss crime, punishment and justice, with much lively and thoughtful discussion from the children. Through stories, children develop their theory of mind, their ability to step into someone else’s shoes and see different points of view and those with stronger emotional ‘tags’ (good and bad) are remembered best. So perhaps we shouldn’t be too quick to ban stories with dubious moral messages but provide a wide diet of stories with strong role models (see https://www.theguardian.com/lifeandstyle/2018/oct/28/dont-ban-princess-tales-or-porn-find-other-stories-to-tell).

This site uses Akismet to reduce spam. Learn how your comment data is processed.